During an advanced algorithmics class at university we had to complete one practical programming assignment. In the introductory class this was the implementation of an AVL-Tree (which is kinda boring), but in the advanced course we had to implement a k-Minimal-Spanning-Tree using Branch and Bound. I found the second assignment much more interesting as its grading wasn't binary (an AVL-Tree either works or it doesn't work), but actually the percentage that the algorithm approximated the optimal solution. 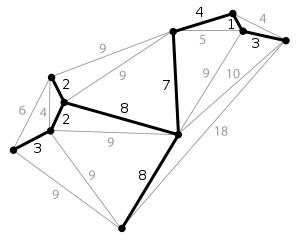 For the case that we are looking for a MST that connects all nodes, the solution is actually quite easy (speaking in terms of computational complexity). Both Prim's and Kruskal's Algorithm solve this problem in polynomial time. Prim's algorithm has a time complexity of $O(E + V * log V)$ (amortized using a fibonacci heap), whereas Kruskal has $O(E * log V)$. Which means that Prim is the better choice given a graph that is very dense.

If we are looking for MST that connects only k vertices of a graph, this problem becomes much more difficult. It is actually NP-hard and can't be solved - most likely - in polynomial time. Thus our best choice is to write an algorithm which provides a solution that is good enough. One might think that with today's hardware it shouldn't be a problem to solve a KMST spanning tree with $100$ vertices and $500$ edges, but this is quickly proven wrong as the number of possible solutions grows exponentially. Additionally the time the algorithm was given to work on each problem-graph was 30 seconds.

Source code is available at the end of the blog post

Having a good upper bound relatively early is important as large parts of the problem-space can be discarded easily: if the weight of the current sub-graph is $>=$ than my upper bound, I can stop enumerating.

My first step was to use a slightly modified version of Prim's algorithm which started at the vertex with the lowest edge/weight-ratio and always added the cheapest edge adjacent to the current graph until $k$ vertices were connected.

This yielded a satisfactory upper bound, but wasn't good enough for most of the more challenging test-cases.

To further improve my upper bound I decided to start a limited enumeration with a maximal recursion limit of $$2 * \mid{V(G)}\mid$$. I think that this limit is a sane approximation for most graphs and keeps the determination of an upper bound from getting too computationally expensive.

For each vertex in $G$ the enumeration was started with this depth-limit. If a new upper-bound was found I "rewarded" the given search path by providing it with an additional $$2 * \mid{V(G)}\mid$$ function calls to find any better solutions that were nearby in the search space.

As both of these approximations are run only once at the beginning of the algorithm, their direct impact on the performance is minimal - the impact of a good upper bound on the other hand is quite large.

As the lower bound has to be calculated at each call of the enumeration it has to be relatively inexpensive. I simply added the overall $k - 1 - E(G)$ cheapest edges to the current subgraph stopped the enumeration if the weight was $>=$ the upper bound.

I actually tried to use a more sophisticated lower bound and ended up decreasing the performance, as the marginally better lower bound didn't discard enough possible solutions to justify it's existence. My approach was to add the $k - 1 - E(G)$ cheapest edges to the weight of the current graph that were not already part of the edge-set.

During the enumeration the most important algorithmic consideration is which edge to add next. For this I precomputed the edge/weight-ratio of each node and added the one with the lowest ratio to the current graph. I also used this metric to determine which vertex to start from.

Using all the considerations I explained above I was able to solve 11 of 15 test cases with the optimal score and 4 with a suboptimal one. My overall approximation was 99.3%.

Branch and Bound itself

Recently I came across a programming challenge which required me to write a mastermind solver. Basically there would be a server which hosts the game and replies to the user's guesses. Of course

Looking for a cheap USB wifi dongle which supported monitor mode I came across this one from TP-Link. I wanted a small dongle that I could always carry with me and that enabled